Sheriff Craig A. Robertson was born in Frostburg, Maryland. He graduated from Valley High School in 1978 and in 1981 graduated from Allegany College of Maryland in Criminal Justice. In 1979, he was hired as a Cadet with the department by then Sheriff Donald R. Wade. In 1983, Sheriff Robertson was hired as a police officer with the Cumberland City Police Department and completed basic law enforcement training at the Western Maryland Police Training Academy. In 1990, while working as a detective with the Cumberland City Police, he accepted the same position with the Sheriff's Office at the request of Sheriff Wade. In 1992 he became one of the original members of the Combined County Criminal Investigation Unit. In 1998, he was promoted to the rank of Lieutenant and assigned as second shift supervisor. In 2008, he was transferred to the position of second in command.

Sheriff Robertson is a member of the Cumberland Fraternal Order of Police Lodge #90, and the MD/DELAWARE Chapter of the FBI National Academy Associates.

He is a graduate of the Harvard Associates for Police Science in Baltimore and FBI Hostage Negotiator School. In June 2000, he graduated from the 201st Session of the FBI National Academy on Leadership and Management. A 30-year veteran of law enforcement with over 20 years with the Sheriff's Office, he won the general election in 2010 to assume the position of Sheriff. Sheriff Robertson also serves as Director of the Allegany County Fire Police Association, a life member of the Cumberland Outdoor Club, and a member of St. Paul's Lutheran Church in Frostburg. Sheriff Robertson and his wife, Cerena, reside in Midland. He has three daughters: Stephanie, Erica, and Sarah, and two grandchildren, Destinee and Alexander. 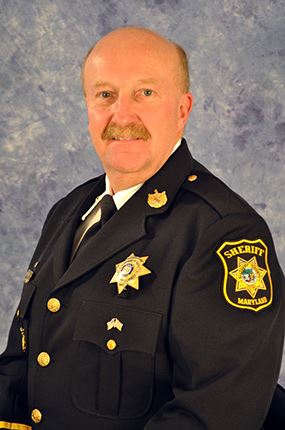